Living on the edge!!
Where does it go?
A river runs through it.
Beautiful falls!!
Just Zipping around today!!
Found this walking in the woods.

This week, I paddled the Weeki Wachee river in Weeki Wachi, Hernando County, Florida. Weeki Wachee is famous for not only its crystal clear spring fed waters, but also the Weeki Wachee Mermaids that perform in the State Park. The Weeki is a first magnitude spring which runs 8 miles to the Gulf of Mexico. There are launch points at Weeki Wachi State Park which is near the headspring, Rogers Park which is about 6 or so miles down stream from the State Park, and at Bayport where it empties into the Gulf. There is a fourth launch point that I found in Bayport.  I had been wanting to paddle the Weeki Wachee for some time, but because it is on the West Coast of Florida and I am three to four hours away on the East Coast, I needed a place to stay overnight that I could either camp at or a hotel in the area that was inexpensive. I was lucky enough to find Mary’s Fish Camp. If you have never been to Mary’s Fish Camp, it is like you are stepping back in time to “Old Florida”. Though they have been there since 1946 and they maintain the “Old Florida” rustic appeal, they offer modern, well kept and extrodinarily clean ammenities like full hook up RV sites, tent camping sites, and cabins at very reasonble prices. They are located on the Mudd River and if you are willing to paddle a little ways, you can access the Weeki Wachi from the Mudd River at Rogers Park. 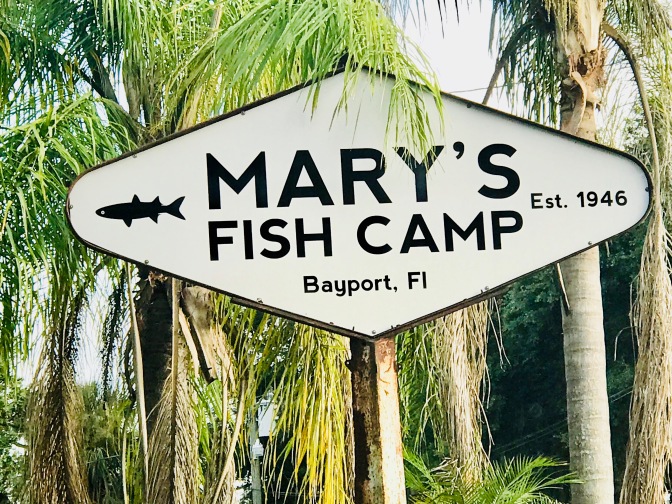 As usual, everytime I make a paddle trip to the West Coast of Florida, the weather never cooperates with me. I left the East Coast in the afternoon and drove across the state beneath sun filled skies, by the time I arrived at Mary’s, the sky had turned dark and thunderstorms had rolled in from the Gulf. Because of the unpredictable weather, and I opted to stay in one of the cabins. All I can say is I was pleasantly surprised. Their cabins are fully furnished with a full kitchen, comfortable furniture, satellite TV and a great view of the Mudd River. The cabin was cozy with lots of space and had a great front porch with a swing and chairs that just begs you to sit outside, have a cold one and watch the sun set. The staff at Mary’s was terrific. They were polite, were able to answer all my questions about the area and really did a great job of taking care of their guests.

My Cabin at Mary’s 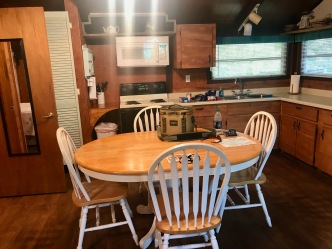 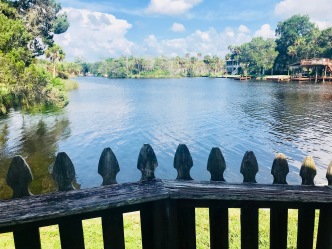 I paddled out from Mary’s the next morning into the Mudd River.

You’ll then pass under this bridge.

Then turn left and paddle underneath this one. 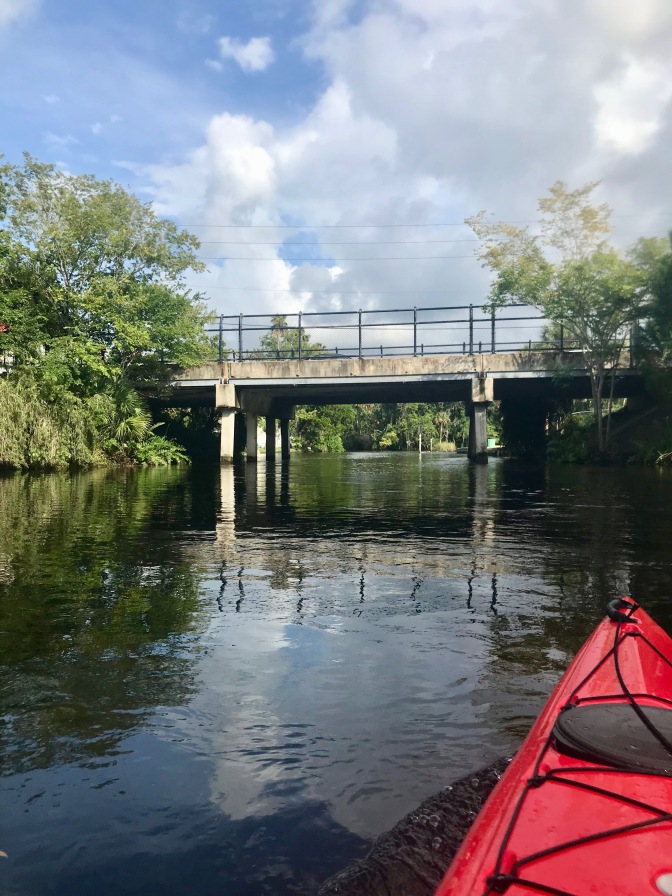 Just past this bridge on the right is Rogers Park and the Weeki Wachi River. If you turn right past Rogers Park, it will take you to the Gulf, turn left and you paddle upstream towards the springhead.  I did not have my GPS but I estimate the distance was about 1 to 1.5 miles from the launch at Mary’s to Rogers Park.

I went upstream. In this part of the river, the water is stained and there is some development. 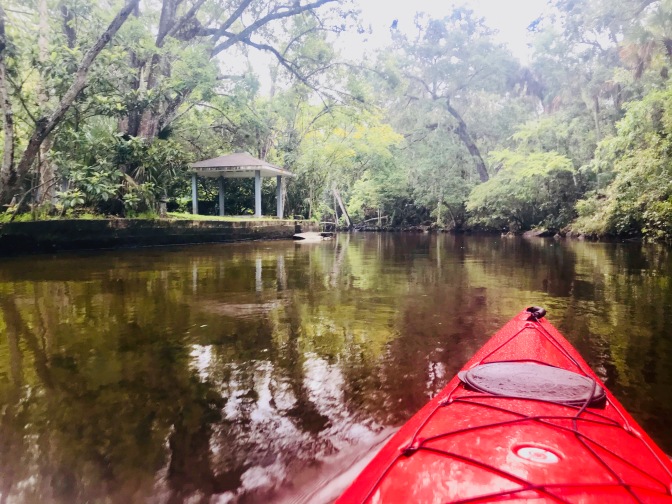 But as you continue up river, the water clarity gets better. 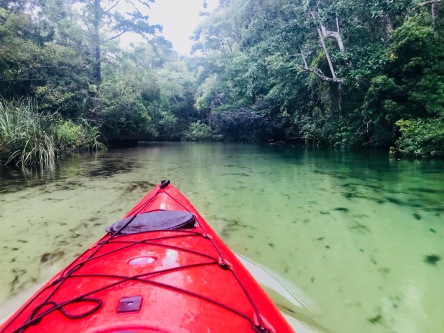 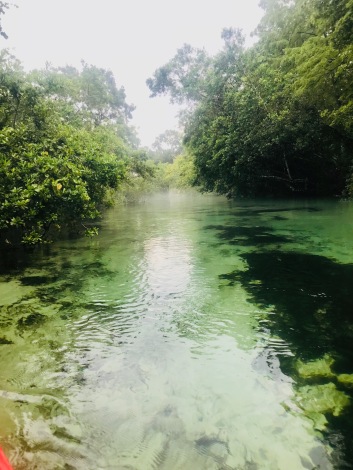 And more beautiful, the further up you go. 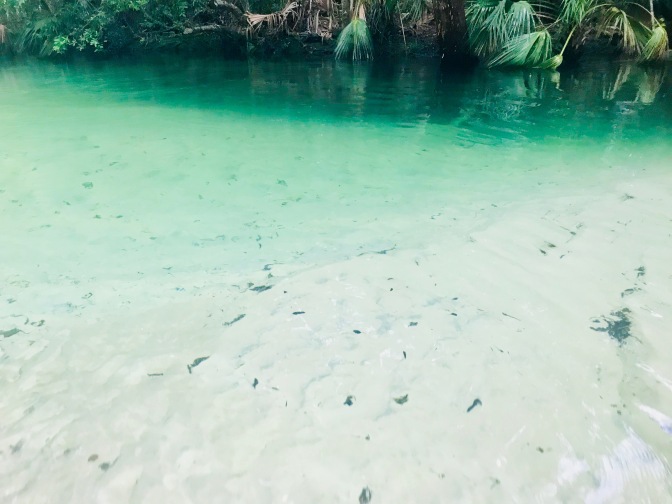 Because of the sporadic thunderstorms, the only wildlife I saw was this this guy.

I passed the learning center.

And eventually got to this spot where I had to turn around.

Though the weather was lousy and the wildlife was not out, this was still a great paddle trip. Total distance about 14 miles round trip. If you have never paddled the Weeki Wachi, put it on your list of rivers to do in Florida. If you live too far away for a day trip, look into staying at Mary’s Fish Camp. You will get a taste of “Old Florida” and it is not far from the entrance to Weeki Wachi State Park so if you don’t want to paddle the 6 miles against the current, you can always put in at the State Park and float down to Rogers Park or the Gulf making it a down river trip.

I love the outdoors. Camping, Hiking, Exploring but most of all, I love Paddling. This is a sight dedicated to my love of these activities and to offer advice to those who share the same passions View all posts by Jaucque LeSavage

One thought on “The Weeki Wachee On A Stormy Day”

This site uses Akismet to reduce spam. Learn how your comment data is processed.